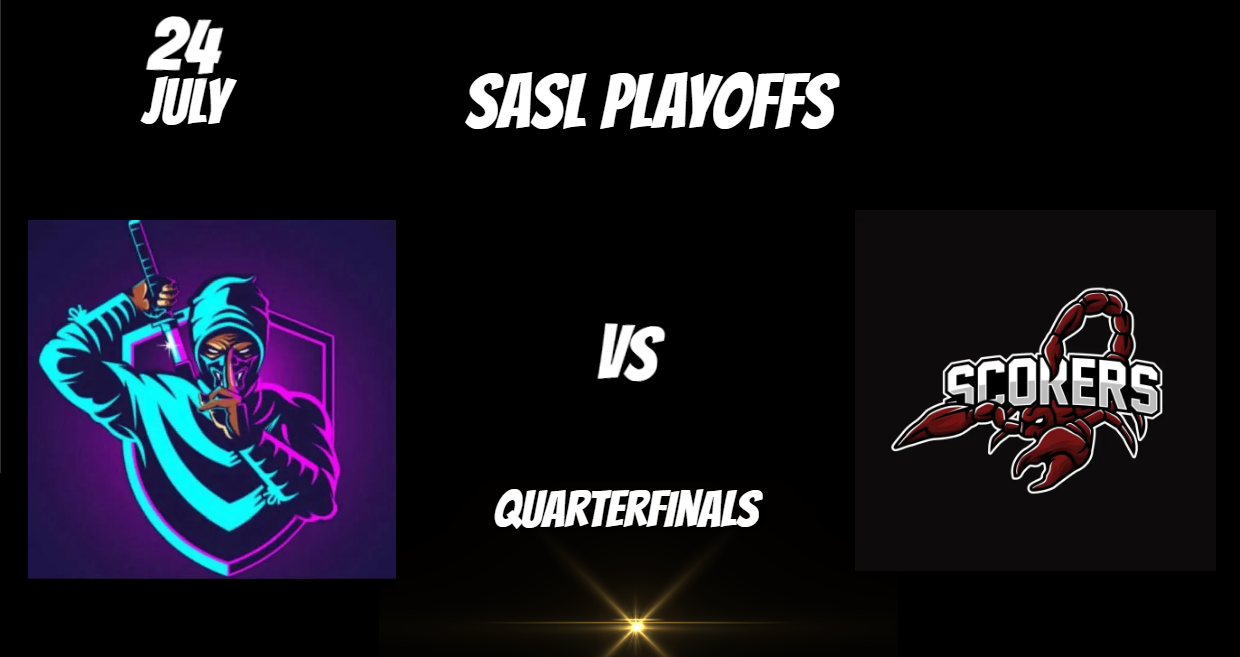 Assassins (3) vs Scorpion Scorers (6) is likely going to be the most lopsided quarterfinals match SASL playoffs has to offer, other than Savages vs the SNL winner. The reason I say most likely is because there are some rumors that key players on Assassins will be MIA for this match. However, you never know what’ll really happen when you’re dealing with Thomas and Rishi. In other news, Adeel’s hopeless attitude says a lot about this Scorers team and the season they had. This combination of Scooby’s team and Adeel, Prince, and co. are looking for a miracle in this one. But hey, at least they have the best-looking jerseys in the league. Not sure what Shane was thinking with the Assassins design…

In the first half of the season, Assassins looked like they were the best team in the league by far, only dropping one game to the now first place Savages. However, they faced some attendance issues and dropped games they shouldn’t have against now #2 HeavyHittaz and Young Guns with 9 players. However, this team still has one of the best lineups in the league, given their bottom of the lineup performing as well as they should. Either way, Shane, Brian, and Keith have what it takes to carry the team by themselves.

You can probably tell by now that Scorpion Scorers are a failed team. They invested heavily in Denen, but he never showed. They faced attendance issues with one of their best players in Nick Karalakes, who had a shot at MVP if it weren’t for attendance. They also had a forfeit because they were out celebrating Shaz’s birthday… one of the only times Denen actually showed up. I’d say the only way Scorers have a shot of taking just ONE game is if Keith and Sugar actually don’t show up and Scorers have the best game of their season. Otherwise, this match has already been decided.

Both pitchers are veterans, but this one easily goes to Assassins. Sugar is just on a different level with his nasty knuckleball and consistency. His bat is also significantly better than Scooby’s. Unfortunately, Scooby has been having a rough season, with just under a 400 OBP. If he can pick it up in the playoffs, it will be great for Scorers, but not enough to make that big of a difference.

Amby vs Shaz a few years ago would have been close, but Shaz fell off pretty hard. Similar to Scooby, he’s had a rough season batting only .353 with no HRs. It’s not normally what you see coming out of Shaz. Amby’s been having a decent season compared to his norms, having to fill in the outfield at times, but he was injured for the most part. However, he’s now back to running full speed right when he needs it the most, so you never know, he may end up in the outfield. Easy choice here.

Rishi has probably had the best season of his SASL career, batting a whopping 731 while being injured for a bit. He’s now back to full capacity and his bat is showing that as well. Rishi’s glove has always been great, so there’s no question he will perform in this match. Prince has actually had a good season this year. He’s batting 579 with an OPS above 1500. While that’s no match against Rishi’s stats, Prince can be seen as one of the best performing members on Scorpion Scorers. Unfortunately, his glove is not on the same level as Rishi’s as we realize he is an old man. This is also an easy decision.

In the beginning of the season, Zeeshan was seen as one of the Scorers’ power hitters who hit in the heart of the lineup. However, he is now the worst performing members on their team. It’s very sad to see because we all know Zeeshan has some pop, but he’s not had the season we expected. Reggie is a solid second baseman for the Assassins. With his 5 HRs, we see that he has power, but his average is quite low at 422. Regardless, it’s no question that a young guy with some range and pop in Reggie is superior to the worst season Zeeshan has possibly ever had.

There’s honestly not much to say about this matchup. Binu is an okay third baseman with slightly below average numbers. Brian is the front-runner for MVP leading most of the Offensive Stats in the league and has an outstanding glove. Without question:

This is one of the best matchups we’ll see in playoffs. Keith is an amazing player and has shown that in every league he’s played in. Although he’s not had numbers showing his skill level, there’s no question he’s one of, if not the best SS in the league. Nick will give him a challenge. Coming in as the league leader in OPS (2.481) and one of the best arms in the league, Nick will have to keep up the outstanding offense he’s shown in the games he did show up to, so that Scorers can maybe sneak a win in the series. If attendance wasn’t a problem and he kept up the numbers, he would likely be MVP. This one is close, but in SASL, Nick has been more consistent. Also, there’s a chance Keith may not show up.

Defense and Offense considered; this matchup is not close at all. The outfield of Assassins has more range, better arms, and way better bats. The best performing member of the Scorers’ outfield is Jojo who has some MVP numbers, but not enough to swing the matchup.  Shane with an MVP-like season, Akil and Sajeel being consistent 500+ avg hitters, Scorers don’t have a chance to match that.

This matchup is way too lopsided. Maybe Adeel was right in losing faith, but I think if Keith and Sugar don’t show up, he should change his attitude. It would be one of the biggest upsets in SASL history if Scorers take down Assassins. Who knows, Keith may not show because he doesn’t want to pay the $10 to get in Cantiague. A lot of things could end up changing. If both rosters are complete on the day, it’s an easy 2-0 for Assassins.

Prediction: Assassins 2-1, without Keith and Sugar, 2-0 with them