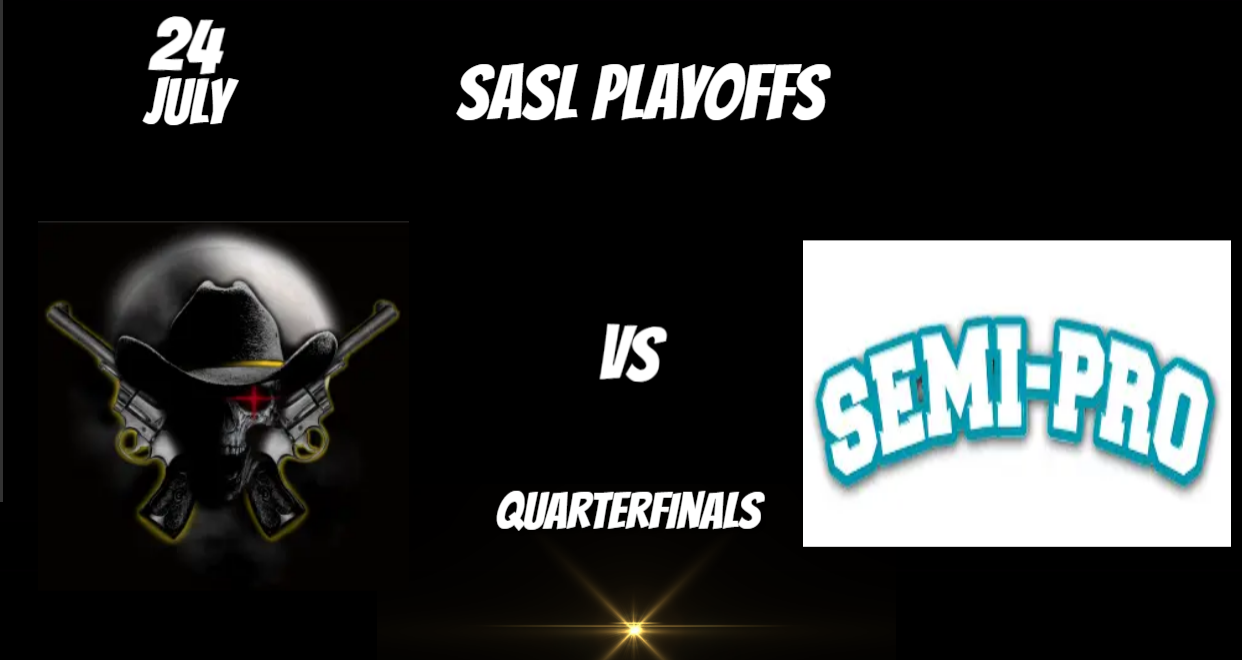 Young Guns (4) vs SemiPro (5) is the closest matchup in our quarterfinals by far. These teams have quite a history playing against each other, especially on Eisenhower 2 which they will be playing on at 12:30PM. However, in the playoffs, SemiPro has always been superior. Will this be the year that the Young Guns finally take out SemiPro? The matchup will be very close. SemiPro has a deep roster and some of the best utility/sub players. So if anyone were to get injured, their backups can easily take over. Young Guns will not have this privilege as they are not sure if they will even have a full roster for this match. Late-season attendance issues from Dan and Justus may end up hurting Young Guns and their potential to win this game. However, they did take down a full-roster Assassins last week. Seems as if it may be an even matchup regardless of Justus and Dan being present.

SemiPro has not had the season they wanted. Losing Jerry, Anwar, and Irfan may have hurt more than they expected. Unfortunately, SemiPro did not pick up as many wins as they wanted against top teams, dropping two series to Assassins and Savages. However, they did manage to sneak in a win against the favorites to win it all – HeavyHittaz, as well as their matchup for this week in Young Guns.  The reason SemiPro haven’t been winning games against those top teams is because they are lacking the X-Factor that Jerry was for them last season. Mike hasn’t had his best season in SASL, only batting 571 as an 8. We all know Mike though, he will show up in playoffs and put on a show. Omar and Milan bring consistency to this SemiPro roster, as they have been for many seasons. There’s no doubt the top 5 of SemiPro will produce for them, the only question will be the bottom of the lineup – Kunal, Naeem, Ronak, Adrian, Umar, and a struggling Saeed. If SemiPro’s bottom of the lineup produces like they did in the first week against Young Guns, it will be SemiPro favored.

Young Guns’ season started off a little bit shaky, getting crushed by Heavy Hittaz with almost double mercies, and randomly dropping game to Dynasty. They even had to go to extra innings with SNL winners – Troopers. You can say Young Guns season was a rollercoaster. Losing random games that should be close, losing the opportunity to sweep Savages because Saiful thought he could play 2B, and losing Dan and Justus in the late season. Just seemed like the losses were piling up for the Young Guns. On the bright side, they did come close to sweeping Savages and Assassins, all without Dan. It shows how much chemistry this team has, even without the former MVP. Josh has stepped up as the leadoff man, shortstop, and best hitter on Young Guns. His consistency played a big part in the successes of the Young Guns this season. Similar to SemiPro, the bottom of the lineup on Young Guns will have to play their best to put up a fight against SemiPro. Lets get into the matchups:

As said before, Omar’s consistency on SemiPro and his leadership is unmatched. He brings a great environment to his team and is one of the best pitchers in SASL. Omar’s offense is always on point, and he provides hitting to all-fields with pop. Wahid has shown that even as an old man, he still brings a lot to the table. The cooler he brings will be the difference maker in this matchup… In all seriousness though, Wahid is batting a solid 500, which is not bad considering how old he is. He’s still got a little gas left in the tank and he’ll definitely use it to push for a championship before he retires. We may see too many walks from Wahid though, so all things considered:

Adeel has had a career season on the Young Guns. For the first 3 weeks of the season, he was batting 1000. No one ever expected that from him, but kudos. He’s kept up an average of 617 this season and is honestly Young Guns hottest hitter, right after Josh. Ronak has not performed as well as SemiPro wanted him to. Only batting 474 on the season isn’t up to par with what SemiPro need out of him. If Ronak is a free out on Sunday, it may cost SemiPro.

Last year, Anthony was SASL’s most improved player and had numbers close to MVP, but this year he hasn’t been showing the similar numbers. However, he is still Young Guns best option as the 2 hitter with Justus being out. A pop-off performance from Anthony can potentially win the series for them, but a bad day can ruin it. Does the former MIP have what it takes to lead the Young Guns (finally) to a series win against SemiPro? Chris Mui is a player who was previously known to have a great amount of pop and a consistent bat, however, it definitely fell off over the years. Chris is only batting 412 this year and seems to be struggling to produce. Only having 12 RBIs and 0 HRs as a power hitter doesn’t seem up to par with SemiPro’s standards. Can Chris turn it around during the playoffs? We will see. But for now, because of Anthony’s better defense and offense:

Dylan has a rough start to this season, striking out a few times and batting slightly under 400. He definitely picked up the slack as it got later into the season and is now at an average close to 500. If he keeps up this late push, Hopes are high for Young Guns. Milan is easily top 3 second basemen in the league. Consistently going oppo and having bloop hit after bloop hit, he’s managed an average of 633, the highest on SemiPro. The leadoff hitter continues to be a menace to teams and if he keeps it up, he’ll be the biggest threat on SemiPro. His defensive abilities are also better than Dylan’s, as Dylan is a natural outfielder, but Young Guns had to compromise because of attendance. That said:

To be quite honest, we don’t know if Tyler will show up. One day he says he’s in, the next he’s out, then the next he’s going upstate. You really never know with him. But what we do know is that he has struggled quite a bit and has had the worst offensive season possible. Although, he did show a ton of life in the last regular season series vs Assassins. Adrian has been a key part of SemiPro’s lineup because he is known to be clutch in certain situations, but is not consistent. Batting only 463 is too low for his own standards because he knows he’s a better player than that. The only issue with Adrian is that people know where and how to play him. If he can switch things up in the playoffs, he will be a difference maker for sure. Tyler is way more agile, which gives him the edge on defense, but as we know in softball, more often than not, offense is superior.

Josh has proven that he can be a leadoff hitter, hitting to all fields with some oomph and also with power whenever he wants. He is the difference maker in the Young Guns roster. Josh is in the top 5 for the hits category and his avg at 629 shows how consistent he has been all season. If he keeps it up, He will be the biggest threat to SemiPro. He’ll also still be a threat with the roasting of Naeem’s sunglasses. Naeem has been hitting quite well for SemiPro, with a 558 average overall. Unfortunately, Naeem’s defense has always been an issue, no matter what field he plays on. Josh has the edge on defense for sure, so we’re going with Young Guns for the advantage. Be sure to tune into the live stream to see if Naeem will actually take his shades off.

As you can see, the outfield is 3 to 4. Young Guns will most likely be playing with 8 or 9, so its for certain SemiPro has a defensive edge in what  should be a 3 game series. However, the Young Guns did beat Assassins with this 3 man outfield. If they are positioned in the right places, it’s for certain this defensive matchup is even. Word spreads and we hear that Umar and Saeed may not be playing at full potential with slight injuries, so if that’s the case, we may see Manju subbing in for one of them. We already know Mike Liang is basically two outfielders by himself, as he covers the most range out of anyone in SASL, other than Andy from Savages. What Semi-Pro should be scared about is Young Guns with an 8-9 man lineup. Young Guns took out Assassins with a 9-man lineup and swept Scorers with double mercies with 9 players. When Saiful and Maury are on, this lineup is the most feared. I don’t even have to say anything about Chris Stefl, you all know and heard of him, he won’t mess around and he is definitely top 5 for most pop in SASL. The former MVP candidate will definitely put on a show tomorrow, there’s no question about it. SemiPro’s offensive coming from the outfield can also be very scary. Umar, Saeed, and Kunal have some pop, especially to the opposite field, so if not played properly, they can take advantage of lazy outfielders. Young Guns 3-man outfield will have to be ready for what’s to come on Sunday or they’ll be drained after one game. Although SemiPro’s outfield has more players to cover ground, Young Guns outfield has the edge when it comes to offensive performance. This all stems from Mike Liang not having a normal season this year (normal being batting 700+). Because fielding and offense will be weighted the same for this matchup specifically, we’ll call it even.

Honestly, we don’t know what will happen for this match. Dan and Tyler may show up for Young Guns, Tyler might show up and not Dan, just Dan and not Tyler, or none of them will show. However, what we do know is that this is the matchup everyone in SASL is looking forward to seeing. The two teams have a lot of history facing off against each other and Young Guns are looking to pull off an upset by taking them down without a full roster. The pressure is on and lots of people are excited about this match. Even without Dan and Tyler, folks say that this matchup is very even.

Based on the Advantages spread evenly, I guess we’ll have to see who takes it on Sunday.

Prediction: Could go either way, definitely a 3 game series.