Probably not only the game of the week, but maybe the game of this young season so far. Both of these teams are high-powered on offense, and both have top-tier players who can change games on their own. Both of these teams can and will score. It starts with a premier QB matchup, with QB Sims Singh v QB Yash Tehrani both of who were winners of the last 2 of the previous 3 SAFL MVP awards, these two going head to head will be fun to watch. Fun to watch also will be AK’s top guns Amneet, Dheeraj, Miguel, and Phil square off against Cobra Kais’s, Cal, Gerrel, Anthony Lewis, and Fatih. AK has shown thus far that they are the class of this division and they are the team to beat, running through Prime Time (2-1) and the Gators (1-2) with ease. Cobra Kai lost by one point last week and although they have one loss, they look to show that they belong with AK atop Division 1.

As we said, both offenses could score at will, and probably are the two best offenses in the league. What this game will come down to is DEFENSE. AK not only has a high-powered offense, but this year they have shown that they are the best defense in the league as well. They give you different looks. They can go man, they can go zone, they could switch coverages at a snap, and they talk to each other and seem to always be in position. Cobra Kai may be the polar opposite. The offense always seems to shine, the stats on offense are just ridiculous with Cal and QB Yash well ahead of anyone in touchdowns and receptions. But the defense just can’t figure it out. The defense has given up 40+ points in two straight weeks and almost lost the game against the Gators two weeks ago if not for a tipped ball and now they must face this potent offense led by QB Sims. Yikes.

If there was ever a game to come and watch, this would be the one. The game starts at 1:00 pm on Saturday, October 1st, 2022 if you can make it from either division, this would be a great game to see for the entire SAFL community. Now, we have to pick a winner, and we know both offenses are similar in talent and production, so we have to go with the better defensive team here, which is AK by a landslide. 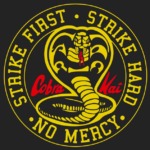 The South Asian Flag Football League of Long Island and NYC (SAFL) is in its 12th season. For more information and to join a flag football team near you, visit southasiansports.com